At the end of last year, I talked a little bit about a project I was working on to see if unsubscribing from spam would actually work. The address I picked was my first non-work/school related email address. It’s been mine since 2004 or so. I stopped using it for anything commerce related back in the late 90s. But it is on a lot of address lists (as it was used to post to Usenet), and a lot of affiliate mailers have it and it gets spam, despite being behind commercial spam filters.
During the month of November, I unsubscribed from every commercial email that came into the account. In total I unsubscribed from 312 messages. We’re now 8 full months after that, and my spam load on that account is only increasing, it was almost triple that amount in April (908 messages).
Unsubscribing from spam does not work. Here’s what 6 months of spam looks like after unsubscribing from every message received in an inbox on an address that is not currently given to anyone (and hasn’t been for more than 10 years). This is also after it’s gone through my ISP spam filters, which do seem to do a decent job of weeding out the botnet spam and phishing. 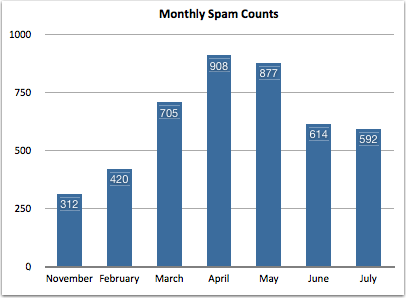 This isn’t, of course, any sort of controlled study and I’ve left a lot of details out of this blog post about the address and about how I handled the project. I do want to write it up and publish it, but it’s a back burner project right now.
One relevant note is about 5 or 6 years ago one of my clients wanted me to look at their affiliates and I was able to pull mail out of this box to show them their affiliates were spamming. They put me on the phone with the affiliate. I explained this was an address I hadn’t used since the late 90’s, before their company existed. They insisted I had given it to them or some company they bought. Even after I used the phrase “spam trap” they still insisted I’d opted in and they didn’t have to stop mailing me.
Another note is that while a lot of these are semi-scammy products, a number of them are legitimate businesses and have broad advertising campaigns in multiple mediums, including television.
For all those people that say “just unsubscribe” it doesn’t always work, at least not for addresses that were on the “millions CD” and the “flamers list” from the “Millions CD.”