I’m not a huge baseball fan, probably a side effect of growing up in a city with no MLB team. 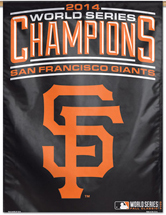 But I do enjoy the social aspects of rooting for local teams when they’re winning big games. Last night I was following the World Series score online and switched over to watch the last inning. I posted something about the game on FB just about 30 seconds before the Giant’s outfield bobbled what should have been a single (at best). I immediately posted an apology, “Sorry about that, shouldn’t have said anything!”
Do I really think that my post somehow cursed two outfielders and caused them to bobble a simple play? No, of course not. But it is a very human response. In fact, there’s an entire advertising campaign centered around the the weird things people do while watching sports.
There is a lot of superstition in email delivery, too. I think that’s a combination of filtering necessarily being a black box, human’s built in tendency to see patterns in random data, and a need to be able to control and affect outcomes.
Figuring out cause and effect in the real world is not trivial. In my research days we set out to control as many confounding factors as possible so we could demonstrate the cause and the effect. That’s really hard to do when you’re not at a lab bench. In the real world, we can’t always control things directly. Instead, we have to rely on statistics and representative (or non-representative) samples.
Delivery isn’t even close to a science and one of the major issues is that filters are always changing. I’ve certainly seen occasions where multiple clients, or colleagues, were having problems delivering to one ISP or another. One of my clients made a change and saw their delivery improve. They patted themselves on the back for figuring out the problem. At the same time, though, other folks saw their delivery improve without making any changes. I can’t always convince people that whatever they did had nothing to do with their delivery improving.
The flip side is I can’t always convince people to stop doing somethings that they don’t need to do. I see a lot of mail with both DomainKeys and DKIM signatures. In most cases both signatures have the same selectors. DomainKeys is deprecated. No one, and I mean no one with a modern email system, is checking DomainKeys without checking DKIM. Senders can safely stop signing with DomainKeys and have nothing happen. It doesn’t matter, lots of ESPs and sender sign with both. They’re not going to change it. I’ve had multiple groups tell me they’re afraid to stop signing because it might hurt their delivery.
The reality is I didn’t make the Giant’s outfield bobble the ball because I posted to FB that I was watching the bottom of the 9th inning. The reality is that DomainKeys is deprecated and there’s no benefit to signing with both DomainKeys and DKIM. The reality is we are humans and we are inherently superstitious. Most of the times our superstitions are harmless. But sometimes they cause us more work than we need to do and provide no tangible benefits.