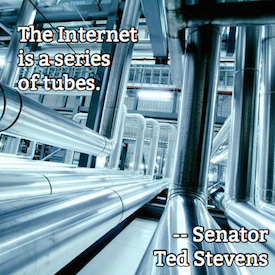 The Internet and pundits had a field day with Senator Stevens, when he explained the Internet was a series of tubes.
I always interpreted his statement as coming from someone who demanded an engineer tell him why his mail was delayed. The engineer used the “tube” metaphor to explain network congestion and packets and TCP, and when the Senator tried to forward on the information he got it a little wrong. I do credit the Senator with trying to understand how the Internet works, even if he got it somewhat wrong. This knowledge, or lack there of, drove his policy positions on the issue of Net Neutrality.
In the coming years, I believe we’re going to be seeing more regulations around the net, both for individuals and for corporations. These regulations can make things better, or they can make things worse. I believe it’s extremely important that our elected officials have a working understanding of the Internet in order to make sensible policy. This understanding doesn’t have to be in their own head, they can hire smart people to answer their questions and explain the implications of policy.
Apparently I’m not the only one who thinks it is important for our elected officials to have a working knowledge of technology. Paul Schreiber put up a blog post comparing the website technology used by the current Presidential candidates. Do I really expect the candidate to be involved in decisions like what domain registrar or SSL certificate provider to use? No. But I do expect them to hire people who can create and build technology that is within current best practices.