Today I received an email from Tumblr asking to confirm I still wanted the username I have there. I’ve not really been using Tumblr, I contributed a few things to the now-defunct Box of Meat, but I don’t really post there much. 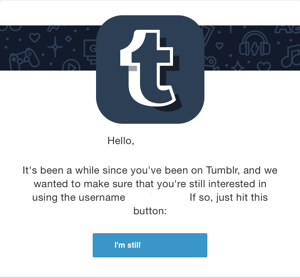 I think this kind of engagement is great. Confirming user names will do a whole lot to allow Tumblr to release some claimed but unused names back into the pool. It will also actually help their deliverability and their engagement. If people do want to keep their tumblr names, then they have to click on the message. This means more clicks and better engagement and an overall reputation boost for Tumblr mail.

September 2015: The month in emailTransactional mail