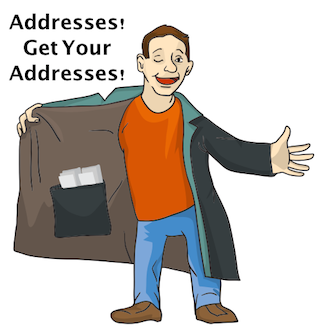 I’ve been talking to a lot of companies recently who are dealing with some major delivery challenges probably related to their practice of purchasing lists and then sending advertising to every address on the list. They assure me that their businesses would be non-viable if they didn’t purchase lists and it has to be that way.
Maybe that’s true, maybe it is more cost effective to purchase lists and send mail to them. I know, though, that their delivery is pretty bad. And that a lot of the addresses they buy never see their email. And that they risk losing their ESP, or they risk being SBLed, or they risk being blocked at Gmail, or they risk bulk foldering at Hotmail. There are a lot of risks to using purchased lists.
The reality is it’s only getting harder to mail to purchased lists and it’s getting more expensive to mail purchased lists. Paying for the list is a small part of the cost of using them.
Other costs incurred by companies using purchased lists include:
1) Having multiple ESPs. There are certainly legitimate reasons for companies to use different ESPs but there is a cost associated with it. Not only do they have to pay for duplicate services, but they spend a lot of employee time moving lists and recipients around to see who might have the better delivery today.
2) Multiple domains and brand new websites for every send. Landing pages are good marketing and are normal. But some ISPs track the IPs of the landing sites, and those IPs can get their own poor reputation. To get around it, senders using purchased lists often have to create new websites on new IPs for every send.
3) Complicated sending schedules. Sending schedules aren’t dictated by internal needs, they’re dictated by what ISP is blocking their IPs or domains (or even ESP) right now.
All of these costs are hidden, though. The only cost on the actual bottom line is the money they spend for the addresses themselves and that’s peanuts. Because, fundamentally, the folks selling addresses have no incentive to take any care in collecting or verifying the data. In fact, any verification they do only cuts into their profit, as buyers won’t actually pay for the verification and data hygiene and it also reduces the size of the lists they can sell.
And, no, data hygiene companies that look for traps and bounces and “bad addresses” don’t take a bad list and make it good. They just take a bad list and make it a little less bad. If the recipients don’t want the mail, all the hygiene in the world isn’t going to get that message into the inbox.
Outsourcing address collection to list selling companies is more expensive than it looks on paper. That doesn’t stop anyone from building a business around purchased lists, though.