Al did a great post over on Spamresource about the how the new list unsubscribe function in the default mail client from iOS10. What’s been interesting to me is how much I’m hearing from ESP folks about how their customers want it gone.
If you don’t know what we’re talking about, in the default mail client on iOS10, Apple is now offering a way to unsubscribe from list mail by placing an unsubscribe link at the top of the message. 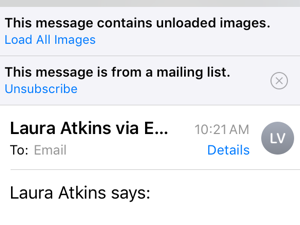 As you can see, this isn’t just for commercial mail, it’s in place for every mailing list that has a List-Unsubscribe header. (This is a screenshot from something I posted to OI this morning). For me, it’s somewhat intrusive. I’m on a lot of discussion lists – technical, marketing, business and even a couple social ones. Reading them on my phone has become a challenge, as every email in a thread contains the “unsubscribe” button now.
Luckily, you can dismiss the message for all posts to that mailing list by hitting the ⮾⮾⮾⮾x. Interestingly, once you’ve turned it off there seems to be no way to turn it back on for that list.
Senders have different complaints, however, they do not have to do with intrusiveness or usability issues.
I’ve heard complaints about placement and about how easy it makes it to unsubscribe. One person even stated that everyone knows the place for an unsubscribe is at the bottom of a message and it should never be at the top of a message. I find these arguments unpersuasive. Unsubscribing should be easy. Unsubscribing should be trivial. People should be able to stop getting mail on a whim. Particularly here in the US, where unsolicited mail is legal, being able to quickly opt-out is the only thing keeping some of our mailboxes useful.
I’ve also heard some concerns that are a little more understandable. One company was concerned that unsubscribes go directly to their ESP rather than directly to them. This is a somewhat more understandable concern. Good senders use unsubscribes as part of their KPIs and as part of their campaign metrics. They know how much an unsubscribe costs them and will use that as part of their metrics for defining a successful campaign. Still, though, it’s not that big a concern. ESPs are already handling these kinds of unsubscribes from providers like gmail and hotmail.
Almost 7 years ago I blogged about a sender who wanted an unsubscribe link in the email client. It was a bit of snark on my part. The interesting part, though, is that some senders want unsubscribe mediated in the client and others things it’s horrible. I think this tells me that there’s no universal right answer. It Depends might be the most hated statement in deliverability, but it is the absolutely the reality of the situation.