I know a lot of folks working at ESPs. For those I know well, I will usually send in reports. Sometimes they’re not spam reports per se. Often it’s just “hey, this sender shouldn’t have my address, might want to poke them.”
Sometimes it’s even more specific. A few years ago I spoke at a user conference for an ESP. I stayed at the hotel for one night, and the hotel now has my email address. Not a big deal, they’re on the coast and an easy drive from here. They’ll run specials for the locals, and I like it.
Enter in hotel B. I’ve never stayed at hotel B. I’m not sure who hotel B is. They’re also local and may be the same management. I don’t know.  They sent me email to the address I’ve only given to hotel A. Not only that, the message is completely unreadable. Dark blue on brown… not exactly a great design choice. 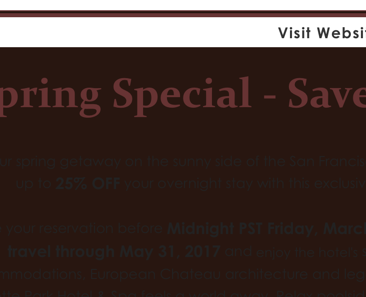 I wasn’t going to send anything in to the ESP, but then I noticed that at the bottom of the email there is a notice that says “This email was sent to: %%emailaddr%%.” That looks suspiciously like this was an accidental send. The ESP folks there are colleagues, so I sent them an email into abuse@.

Mail sent to an address given to a different hotel (Hotel A, from a conference). Also, they really screwed up their HTML here. I can barely read the dark blue on brown.
Anyway, either someone did something bad, or they’ve been compromised somehow. Might be worth looking into.

Bad email marketing makes me twitch. But I’ve discovered that sending in messages to support@ or even calling their 800 numbers just leads to frustration for everyone involved. Maybe sending something broke messages to abuse@ isn’t the right thing to do. At least I know the right people will see the mail.