I recently received a 419 spam that had a message at the top of the email. 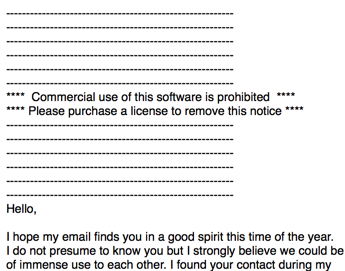 Yup, a 419 spammer is trying to convince me there are millions of dollars waiting for me, but he won’t pay his software vendor 29.99 to comply with a license.
This is only the most recent in a long line of examples of spammers being cheap and attempting to steal services.
Back when I was working abuse almost every ISP had a story about a spammer who refused to pay their bill. Or spammers who were so high maintenance they cost the company money.
The company I worked for had a spammer that was on our system for far too long. Eventually they were cut off for non-payment and their hardware was confiscated. Still, the spammer came in and managed to remove the hardware before the building guards were alerted. It was disappointing, but at least they weren’t spamming off our network any longer.
Even now, ESPs share stories of customers who come in, spam and never pay their bill. Works for the spammer, they can get a few weeks of spamming in without having to pay for the service. They spew their stuff and leave a giant mess for the ESP to clean up. Next week, they’re on to the next ESP.
The real problem with this is that with enough ESPs and enough sends you can clean a list. This list can then be sold, or moved to a credible ESP without any of the tell tale signs of a purchased list. It’s so common it even has a name: waterfalling. It’s profitable, though, and there are enough small ESPs out there with little compliance experience that it can work.
I regularly get questions from folks who’ve worked themselves into a hole about swapping IPs or domains in order to get out of the hole. My answer is always the same. Changing identity might work in the short term, but it won’t work longer term. I also tell them that spammers have been trying to avoid filters for a lot longer than they have. Spammers are good at it, and still get caught in filters. Better to spend time trying to fix the underlying problem – typically users aren’t engaged with your mail – then trying to obfuscate who is sending the message to avoid filters.
Focus on sending good email that users want, rather than trying to avoid filters. That’s the key to getting into the inbox.

Are they using DKIM?Protocol-relative URLs in email