Monday I published a blog post about the ongoing B2B spam and how annoying it is. I get so many of these they’re becoming an actual problem. 3, 4, 5 a day. And then there’s the ongoing “drip” messages at 4, 6, 8, 12 days. It is getting out of control. It’s spam. It’s annoying. And most of it’s breaking the law.
But, I can also use it as blog (and twitter!) fodder.

I get a lot of this mail. But typically I delete, block or filter and move on. I don’t send a lot of spam complaints because they take time and I have better things to do. I usually only send complaints to ESPs where I know folks; mostly as a favor to them. There aren’t a lot of FBLs that cover B2B mail, so the individual complaints are useful. But, complaining takes time, not much admittedly, but sometimes it’s more time than I can (or want to) spare.
Yesterday was slower than normal, though. I wanted to follow the Senate hearings, so was just catching up on stuff while watching CSPAN. I checked out the AUP at the ESP. It looked pretty good. Even better, it wasn’t the standard boilerplate borrowed from a site that borrowed it from a different site that borrowed it from somewhere else. When it comes to AUPs, it’s turtles all the way down. 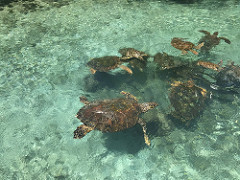 Anyway, I sent a message to their abuse address. It was one of my normal notices, nothing exciting or earth shattering.  I assume anyone reading the abuse mailbox can ID their customers, they don’t need pages of whois or IP lookups. Just the facts, ma’am. My messages have full headers, a sentence or two about the message and then I click send and dispatch it into the ether. My job is done.

And I am amused…

The company selling the address was one that approached me for delivery help earlier this year. Their database has a problem, they said. They want to really clean it up, they said.  I sent a proposal, then they disappeared. Happens. But, now I know they’re representing that database as valid. Even though they know it’s a train wreck (my words, not theirs).
Monday’s post was prompted by different vendor in the space contacting me for delivery help. Seems it’s really hard to consistently spam B2B targets. I’m pleased that the commercial filters and outsourced mailbox providers are doing such a good job.

And it doesn’t end…

And, as I’m writing this post, I got ANOTHER one of these. This one is even better. It’s from someone named Vitaliy Katsenelson. The subject line is a real winner: Hello from your LinkedIn BFF. Except it’s not sent to an address LinkedIn has for me. So, right then, I know they’re lying. But, because I’m blogging about this and I’m in a frivolous mood, I decide to look him up on LinkedIn.
Guess how long we’ve been connected on LinkedIn? How long a relationship would you expect “BFF” to describe? A week? A month? A year?
Whatever you guess, you’re probably wrong. We’re not connected on LinkedIn. He’s my BFF and we’re not even connected.
OK, so that’s not a true sign of BFFs. I mean, there are folks I’m quite good friends with that I’m not connected to on LinkedIn. Just not realized it, or haven’t taken the last step. Fair enough. Guess how many connections we have in common?
One. We have ONE whole connection in common. And I’m not even quite sure who that connection is – I generally accept all LinkedIn connections, so there are a lot of folks I don’t know on my list. Not exactly someone I’d call my BFF.

And now one of them calls…

I have a boilerplate I was sending for a while. In it I point out they’re violating CAN SPAM (because 99 times out of 100, they are). I point out they should really have that looked at and that we sell services for CAN SPAM compliance. Usually, that actually makes them go away, which is the real point. But one of the spammers called me while I was writing this. Really.
He assured me that the hundreds of messages he sent out every day were indeed written by him. All of these hundreds of messages are one-to-one. I don’t believe him. I told him that. He said of course they were. I said he was buying addresses and dropping them into his automation software. He denied everything.
Just FYI: these “one to one” messages are coming direct from Salesforce.
I asked where he got my address. He tells me LinkedIn. AGAIN with the LINKEDIN! No. No it’s not LinkedIn. That’s not the address LinkedIn has for me. Sorry dude. Then he backtracks and says he gets addresses from lots of places. Duh. I told you that above. You’re buying addresses and I know it and you know it. And you’re violating the law when you do it.
Just FYI: I have different emails in different places to make it easier for me to respond appropriately to messages.
He really just wanted me to know, though, that he worked very hard to find my name. These are one-to-one messages because he just knows that his services would help my day to day workload. It’s really hard for him to send hundreds of personalized messages a day and he doesn’t use software and it’s all about the recipient.
Just FYI: my LinkedIn profile makes it very clear we’re not a candidate for their services.
And… now he’s asking to be connected to me on LinkedIn. “Because he likes my passion.” Yeah. Maybe not.

So what’s your point…

I don’t really have one, I’m feeling punchy.
Well, OK, maybe I do. Look, I am a small business person. I AM your target market. B2B drip campaigns are annoying. They’re spam. Just because you upload a list of addresses and click “send” individually doesn’t make them one-to-one mail. They’re still bulk. Filters are evolving to catch and block or spam folder this kind of mail. I expect there’s probably 12 or 18 months left until the filters really catch up.
Right now most of the software sends mail through the users’ Gmail or Office365 account. Those ISPs have limits to the amount of mail any one account can send per day. They will change these limits to deal with outbound abuse.
Even more important, filters continue to evolve. They’re always improving. These messages get through now, but the more that are sent, the more the filters have to work with. Small business owners are moving their domains to Google Apps or Office365. These filters know it’s not one email, or 10 emails, but it’s hundreds or thousands of emails every day. Business users now have TIS buttons. Google and Microsoft measure engagement on business emails. They’ll adapt quickly. These “one-on-one” messages will end up in the bulk folder and rot away.
Spammers will, of course, find a new way to annoy recipients. And the filters will adapt. So it goes.