In April of last year I created a new twitter account. I can’t remember exactly why, but it was a throwaway created to look at some aspect of how twitter interacts with new accounts.
As part of the account creation process I gave Twitter an email address. They sent me a confirmation message right away: 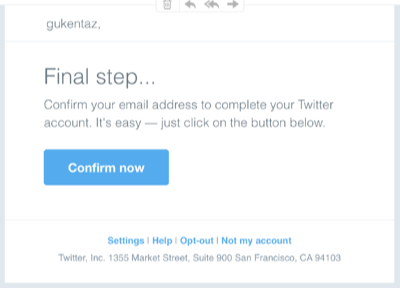 I didn’t click the button.
Four months later they sent me another confirmation email. I didn’t click the button.
It’s now sixteen months later. Nobody has logged in to or interacted with that twitter account since the day it was created. Twitter are sending me confirmation messages for that account about once a month.
They’re doing quite a lot of things right – they have not just an “Opt-out” link but also a “Not my account” link, which is great!
But after sixteen months of not returning your messages, maybe they’re just not that in to you?