I had other posts in the pipeline, but saw a link to the Litmus 2017 State of Email Deliverability Report and decided that deserved a mention here.
There’s all sorts of interesting data there, and well worth a download and read. I was, of course, interested in the “most problematic subscriber acquisition sources.” Senders having blocking issues or blacklist problems in the past 12 months use list rental, co-reg and purchased lists more often than senders that didn’t have problems. 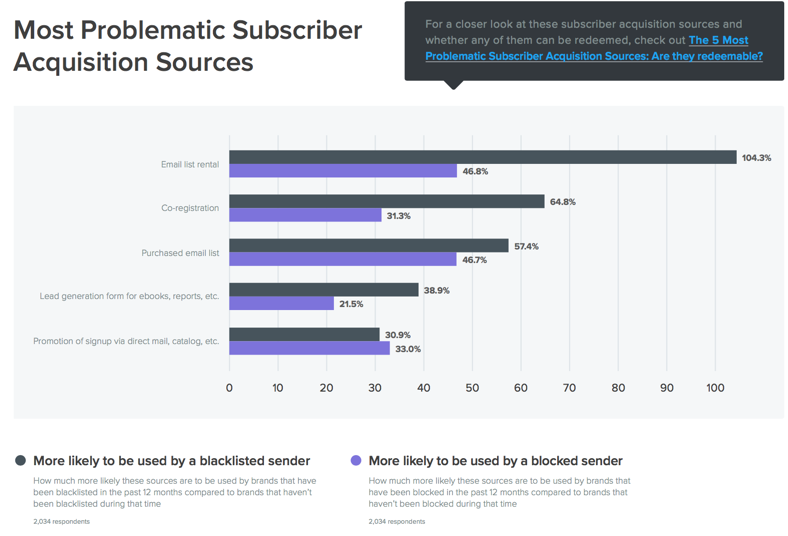 Senders acquiring addresses through list rental are 104% more likely to be blacklisted than senders not using list rental. And they’re 47% more likely to be blocked.
These stats are the primary reason that most ESPs don’t allow list rentals, purchased or co-reg lists. They cause blocking and blacklisting. The ESP ends up having to deal with lots of problems and clean up the mess.
I’m unsurprised that lead generation by giving something away (a report, ebook, whatever) is related to problems. Most of these forms do little to no data checking and accept any and all fake data. There are fairly simple ways to enforce better data, but that does limit the spread of the information.
I am surprised to see signup through direct mail and catalog sales is so bad. Unless maybe people don’t know how to say no when asked for an email address over the phone. I know it seems awkward to say no when asked for an email address. Maybe some folks are giving fake addresses. I sometimes say I don’t have email, or just tell them no, they don’t need one.
The white paper itself is well worth a read. Go download it yourself (but don’t give them a fake email address!).