Wow! Congrats to all the senders out there for sending So Much Volume that mail servers are full. I’ve even seen reports that STARTTLS connections are taking multiple seconds to establish at Gmail. The volume of mail that it takes to make Google slow down is impressive. 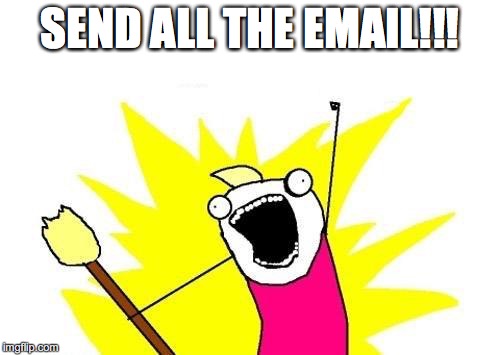 Of course, Gmail isn’t the only system exhibiting slow downs.  Other major consumer webmail providers are also showing signs their servers are under heavy load. I’m seeing reports about both AOL and Microsoft accepting mail slowly. Oddly enough, I’ve not seen anything about Yahoo having issues. Maybe folks just never use yahoo.com addresses any more.
There may not be a fix for this. It is very possible receiving systems just do not have the capacity to handle the volume of mail folks want to send today. If senders have, collectively, decided to send more mail than max capacity there isn’t much that can be done. Maybe some very forward thinking ISPs have spare servers they can deploy, but it’s unlikely.
No major advice here, just a warning that receivers may not be able to access all the mail that’s currently being shoved at them. Nothing to do except retry, and perhaps hold off some “less urgent” sends until after normal business hours. Those of you who are sending Cyber Monday sales emails may just have to extend them to Tuesday in some cases.
EDIT: After I posted this, I saw problems with Yahoo (mail accepted but not making it to the inbox) and Earthlink as well.