The spam email itself looks pretty much like any business email. Slightly excessive use of bold, but more restrained than much of the legitimate email I get, both 1:1 and bulk. It’s trying to sell me inexpensive, outsourced software development.
Even the signature at the bottom is fairly restrained compared to many:

Other than my knowing that this isn’t email I asked for, and that it went to an email address I wouldn’t have given out, I can’t tell from the content that it’s not legitimate. Nor can the spam filter in my mail client, nor can spamassassin (“X-Spam-Status: No, score=-2.689“). It’s delivered right to my inbox.

“Lisa Ross” and a New York area code. But “Private Ltd.” is not a US style company name. Let’s see who they really are. 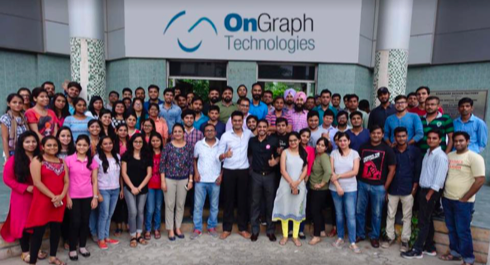 Meet OnGraph Technologies of Noida, Uttar Pradesh, India.
I’m not suggesting that Lisa Ross and her New York phone number are entirely fake, but I can’t find any independent sign of her existence via, e.g., LinkedIn and the New York business address they provide is a shared office building mostly used by medical offices, and suite 304 seems to have at least five different businesses being operated out of it, judging from Google search. It’s either a single US salesweasel or a mail drop and a VoIP number.
So they’re an Indian company, about which more later. Let’s look at who is providing them service.

The spam is being sent from mail-oi0-x242.google.com, presumably Google Apps. It’s squeaky clean technically, passes SPF, has valid DKIM and it’s even DMARC aligned, coming in from a Google ipv6 address that as far as I can tell has a decent sending reputation (SenderScore has never heard of it, but SenderBase thinks it has a good reputation).
It’s Google. There’s probably quite a lot of wanted email coming from there, so there’s no risk of it being blocked by recipients.
And this isn’t an actual user sending mail through Google. It’s a third-party app designed for spammers that connects to Google to parasitically take advantage of Google’s delivery infrastructure and reputation to send spam with little risk of it being blocked or filtered.
As I understand Google’s policy on people doing this it’s, pretty much, that it’s OK to use Google apps this way and that the level of complaints due to this is low enough that it’s not something they tend to take any action on. And, at the scale they’re working at, I don’t blame them. They’re not making much profit margin on each Gmail account and only a little more on Google Apps – spending enough to mitigate outbound abuse more effectively than they currently do at scale would eat into their $26B profit.
A third-party app for spamming, you say?

SalesHandy provide a web app designed for spamming. They’re based out of Gujerat, India (of which more later). Their web infrastructure is all hosted by CloudFlare (of which more later), and their domain is registered through GoDaddy (of which, yes, more later).
They sell a bunch of services, including spamming via Gmail or Google Apps, link and open tracking for that spam, and a variety of address acquisition methods.
Their preferred acquisition method for high quality, targeted addresses is to buy their chrome extension, findthat.email (hosted at Amazon EC2), subscribe to their service and harvest them from LinkedIn:

By entering the job title in the search bar and choosing the “People” tab. You can find up to 10 email addresses on a page. And keep moving to the next page. Within a matter of minutes, you can collect hundreds of email addresses.

Make a list of prospects with their first name, last name and company domain.
Upload this list to Find That Email’s bulk find feature
Find email addresses
You might be thinking, how long will it take to find 5000 names and company domains. A solid trick is to get the help of a Filipino virtual assistant, who you can pay $2/hr to collect names.

SalesHandy sure aren’t going to take any action to stop spam being sent – that’s their business.

They’re the spammers. They don’t care.
Their inbound email is all handled by Google. Their web infrastructure is hosted by both Amazon and CloudFlare.

Amazon do more than selling you so many things online that the limiting factor is how fast you can recycle their cardboard boxes.
They also offer a very solidly engineered cloud hosting environment, EC2. It’s huge. Half the companies you can think of are hosted there, including most of Netflix’s infrastructure. They let you spin up virtual machines, use them, then destroy them and charge you just for the minutes you use them.
All of which is great, but also very ripe for abuse. When EC2 first started it was a horrible source of spam, but by 2009 or so almost everybody was just blocking all email coming from EC2 network space – this is the main thing that triggered the business of ESPs with APIs aimed at web developers such as sendgrid. Eventually Amazon throttled down to almost nothing outbound email from EC2, and set up their own ESP – Amazon SES – to siphon off some of the profits from providing EC2 users with a channel to send email.
That fixed the problem of spam being literally sent from EC2 quite effectively. But it’s still a pretty safe place to host abuse related websites. They do have an email address that accepts reports of abuse, which is handled by a bot that checks to see if you mention a valid EC2 IP address and sends a friendly reply if you do. But I’ve reported “bad” websites on their network and they’ve still been there, at the same IP address, when I’ve checked weeks later. I suspect that as long as the content itself isn’t illegal there’d need to be quite a high volume of complaints to provoke action. Again, it would be expensive to mitigate abuse at this scale, eating into their $180B profits. And as the vast majority of sites hosted are at worst harmless no third party is going to filter them en-masse – that’d just be silly.
So no help there.

CloudFlare host websites, so as to hide the people who operate them and protect them from being taken down. If you ask them about that, they’ll agree with most of it, but tell you at tedious length that they don’t host websites, they just provide the public IP address and TLS certificates for websites and proxy the traffic to the real webserver elsewhere.
Whatever. They’re the only people who can effectively take down a website that they’re proxying. And, as a matter of policy and deep personal belief, they don’t. They do, however, dox anyone who reports abuse to them to the abusive websites. That applies to Nazis, White Supremacists and some of the nastiest hate sites on the Internet. They’re certainly not going to care about B2B spammers or spamware vendors.
Definitely no help there.

I’m picking on GoDaddy because they’re ahead of the curve on hiding or falsifying data about domain ownership, but most domain registrars are comparable.
If anything, GoDaddy used to be a riskier place to register a domain that was going to be used abusively than most registrars as their abuse enforcement was inconsistent – sometimes serious issues were ignored, other times a domain would be yanked for no particularly obvious reason. They’ve gotten more in line with other registrars recently, though, and while I’m sure they’re responsive to subpoenas and law enforcement requests abuse reports are mostly ignored. (I just spot-checked and an abusive domain I told them about in mid-December is still up and spamming. I never got a response from GoDaddy).
Currently whois results from GoDaddy look, at best, like this:

(They have fixed the whois lookup URL, but the whitelisting URL is still broken).
The registrar issue is going to get worse as, driven partly by European adoption of GDPR, registrars are likely to be hiding all information about the identity of a domain owner from everyone but law enforcement and maybe some security companies.
So no help there.

Why mention the country that both the spammer and the company they use to send spam through are based in?
Because a lot of spam, B2B spam in particular, comes from India. And none of the providers there seem to care.
It appears to be a cultural problem from the top of the country down.
I regularly get spam from Narendra Modi, the Prime Minister of India, or at least spam sent on his behalf by the Indian Prime Minister’s Office. It’s sent to a variety of email addresses, harvested from various places (and one that was stolen from a US government database).
Which entity actually sends the spam from the Prime Minister? nic.in – the department of the Indian Government responsible for most of their internet backbone, messaging and IT.
No help there either.

There will be increasing volumes of B2B spam being sent for the foreseeable future, and there doesn’t seem to be much we can do to change that.
If your career involves filtering inbound spam – consumer, smb or enterprise – it seems your skills will be in demand for a long while yet.

How long does it take to change reputation at Gmail?Yahoo fixed