There’s going to be a lot of hype today about something the security researchers who found it are calling “EFAIL”. Interviews, commemorative T-Shirts, press tours, hype.
The technical details are interesting, but the un-hyped end-user advice would probably be “If you’re using a mail client that’s got bugs in it’s MIME handling, and you’ve configured it to load remote content automatically, and you’re using a less secure encryption tool or protocol, and you’ve configured it to decrypt things automatically, and security of your email is so important to you that you’re defending against skilled attackers who have already acquired the encrypted emails you’re concerned about (by compromising your ISP? Sniffing non-TLS traffic?) then you may have a problem.”
I can’t imagine anyone for whom email security is a critical issue would make all those mistakes, so this mostly merits a heads-up to the MUA developers (which has happened) and maybe a “Do people rely on S/MIME? Why?” retrospective. But as someone on twitter described it “The Vulnerability Hype Train has begin, choo choo.” 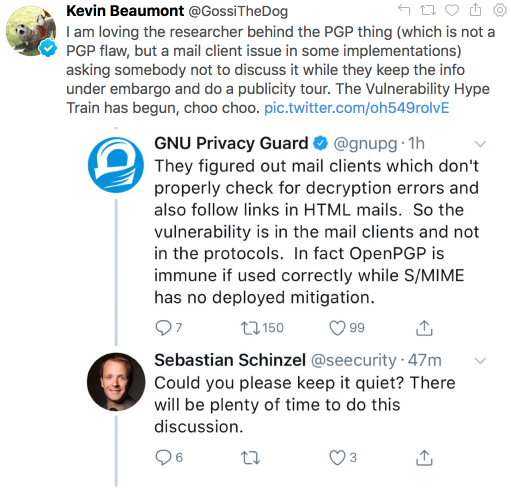 There are several different issues all mixed together by the efail folks. All of them require an attacker to already have access to (encrypted) sensitive emails, and to send copies of those to you wrapped up in another message and to have you decrypt that incoming mail.

The analysis on this seems good, technically. The cryptographic work appears solid – even if it’s pretty much just a rehash of decade old known issues. And the work done surveying clients for vulnerabilities is useful. MUA developers and people developing border mail filters should definitely read the paper.
But it follows the recent history of such disclosures, having a memorable name, it’s own website, a logo and announcement headlines chosen to get a response rather than top be accurate. This is primarily an issue with corporate encrypted email using S/MIME, but the announcements mostly describe it as being a bug in PGP (it isn’t) and stress it being used to attack those who use PGP – “journalists, political activists, whistleblowers, …” – which it probably isn’t, at least not successfully.

Keep your mail client updated. If privacy is important to you at all, don’t have it load remote content automatically.
And if you deal with sensitive emails that have to be encrypted and where someone may specifically be targeting you, you really have to try and understand what the threats against you are, as most of them aren’t as simple as this one. There’s no “do these five things and you’ll be secure” listicle.