Alice and Bob can send messages privately via a nosy postman, but how does Bob know that a message he receives is really from Alice, rather than from the postman pretending to be Alice?
If they’re using symmetric-key encryption, and Bob is sure that he was talking to Alice when they exchanged keys, then he already knows that the mail is from Alice – as only he and Alice have the keys that are used to encrypt and decrypt messages, so if Bob can decrypt the message, he knows that either he or Alice encrypted it. But that’s not always possible, especially if Alice and Bob haven’t met.
Alice’s shopping list is longer for signing messages than for encrypting them (and the cryptography to real world metaphors more strained). She buys some identical keys, and matching padlocks, some glue and a camera. The camera isn’t a great camera – funhouse mirror lens, bad instagram filters, 1970s era polaroid film – so if you take a photo of a message you can’t read the message from the photo. Bob also buys an identical camera. 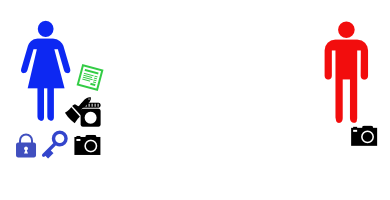 Alice takes a photo of the message. 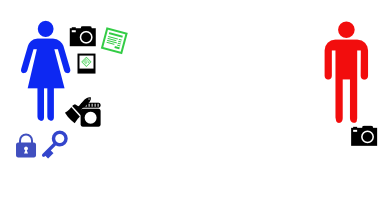 Then Alice glues the photo to one of her padlocks. 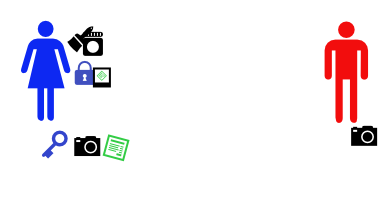 Alice sends the message, and the padlock-glued-to-photo to Bob. 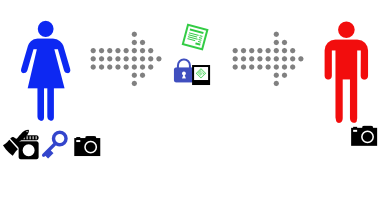 Bob sees that the message claims to come from Alice, so he asks Alice for her key. 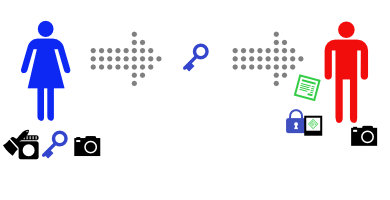 (If you’re paying attention, you’ll see a problem with this step…)
Bob uses Alice’s key to open the padlock. It opens (and, to keep things simple, breaks).
Bob then takes a photo of the message with his camera, and compares it with the one glued to the padlock. It’s identical. 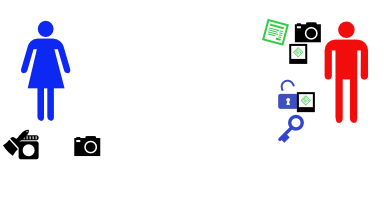 Some things to note:

How does DKIM use this to sign messages?
The algorithm (funhouse camera) that’s used to generate the hash is defined in the DKIM-Signature header by the c= and a= headers (there are several steps, but the final one is the cryptographic hash proper, typically SHA256). The hash (photo) is stored in the bh= field of the DKIM-Signature header, and the signature itself (padlock-with-photo) is stored in the b= field. The recipient uses the d= header to find out who signed the message, and retrieves the signers public key (blue key) via a DNS lookup. Then they use that public key to validate via RSA the signature (unlock the padlock). They then normalize and hash the message in the same way as the sender did, and confirm that the hashes match.
There’s a more detailed description at dkimcore.org and the formal specification is in [rfc 4871].
About that problem …
There’s a huge hole in the process as described. When Bob retrieves Alice’s public key, how does he know it wasn’t tampered with en-route? If an attacker, Mallory, has access to the communication channel he can send a message claiming to be from Alice but signed with Mallory’s private key. When Bob requests Alice’s public key Mallory can intercept that too, and replace it with Mallory’s public key. That signature will validate, and Bob will believe that the imposter message he received from Mallory really came from Alice.
There are several solutions to that. The simplest is to rely on a supposedly more secure channel to retrieve a public key with. That’s the approach DKIM uses to sign messages, relying on the integrity of the domain name system to publish the senders public key. That’s really not terribly secure, as there are lots of ways to compromise DNS. But it’s simple and it’s “good enough” for DKIM’s purpose – being able to bypass some spam or phishing filters by masquerading as someone else isn’t a particularly valuable target. That’ll get more secure as DNSSEC support is deployed more widely. (If your DNS isn’t protected by DNSSEC you should probably put it on your medium-term list of things to consider.)
Another approach is to use a web or hierarchy of trust. But that, and certificates, is another article.