An interesting observation from Brian Curry about how Microsoft is using the List Unsubscribe header in their interface. The short version is that Microsoft is only supporting mailto: links. They’re ignoring any List-Unsubscribe links that are a URL.
Here are some screenshots.  When the sender is using a List-Unsubscribe <http://> header, Microsoft states that there is no information on how to help the user unsubscribe, so the offer to block the sender instead. Like in these two messages. 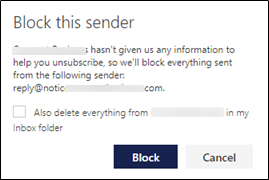 When the List-Unsubscribe header uses a mailto: link, Microsoft uses completely different language in the popup and does let the user know any future mail will go to the junk folder. 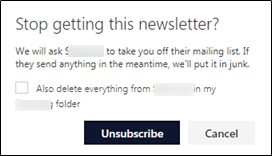 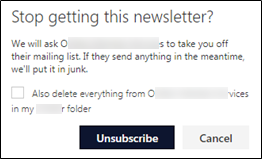 What does this mean?

We’re seeing a definite bias towards the mailto: link by various ISPs. Gmail has stated they prefer a mailto: link and Hotmail is refusing to support a http:// link. I think it’s good practice for every sender to use mailto: links. If this isn’t something software can handle, then that feature should be on the development roadmap.
There are a couple other things that I think are worth mentioning here.
First is that Microsoft is making it trivially easy to block senders that don’t use the List-Unsubscribe header (or just use the http:// version). Yet more evidence the ISPs are prioritizing user experience and making it easy for users to control what gets into their inbox. Blocking senders is not something that folks revisit very often. In those cases where I’ve put an explicit block in my mail client I may check it once ever couple years. Of course, the mail I block isn’t normally commercial mail, it’s people. But the principle is the same – it’s easy to block a sender and once individual blocks are set, they’re rarely reconsidered. This makes it even harder for senders to get to specific inboxes.
The second is that using the List-Unsubscribe header gets future mail from that address delivered to the junk folder. Again, a sign that user experience is one of Microsoft’s priorities. That means senders who are sending in the 10 day CAN-SPAM window aren’t actually reaching their recipients. That mail is going right to bulk.
The other issue is that Google revealed late last year that mail delivered to the spam folder at Gmail, even when that mail was delivered there by Google’s filter, negatively impacts the sender’s reputation. I, and I think other folks, were under the impression that continuing to send mail to the bulk folder was not going to actively hurt reputation. We were wrong. The reputation hit isn’t quite as big as when the individual user moves mail to the spam folder, but there is still a hit. If Microsoft is also looking at total mail to bulk then sending after an unsubscribe could hurt reputation overall.
Overall, use the mailto header for list-unsubscribes. Even if the “one click” unsub link ever get standardized, mailto is likely to be preferred by the ISPs.