All of the technical security in the world won’t fix the biggest security problem: people. Let’s face it, we are the weakest link. Adding more security doesn’t work, it only causes people to figure out ways to get around the security.

The more secure you make something, the less secure it becomes. Why? Because when security gets in the way, sensible, well-meaning, dedicated people develop hacks and workarounds that defeat the security. Don Norman

This isn’t news to anyone in the security space. Even those of us who are reasonably aware of security issues can still have problems. A few weeks ago I clicked on a phishing link. It was a delivery notification. I’d just ordered something online. It looked plausible. I clicked the link. Lucky for me there wasn’t drive-by malware on the site.
A few years ago, there were a number of email people arguing that two factor authentication (2FA) would fix the security problems. Steve wrote a couple blog posts here explaining why that was unlikely. (Defending against the hackers of 1995, What is Two Factor Authentication, Two Factor Authentication)

What is two factor authentication?

The older blog posts talk about 2FA, but a quick review for folks. 2FA requires two separate factors to identify a user. Many people describe this as “something you know and something you have.” A user might know their password and have access to a phone that will receive a SMS one time code.  Many online services currently offer two factor authentication. Google even provides an authenticator app people can run on their cell phone. Companies that want to offer 2FA using that app can. I set up 2FA for a service over the weekend – it was as simple as taking a picture of a QR code and typing the resulting number into the website.

The problem is that it is possible to subvert 2FA. Back in 2011 attackers hacked one of the major 2FA vendors and stole the master keys. A little while later, some government contractors reported attempts to break in potentially using this information.
Now we’re using multiple forms of 2FA, so it’s more secure, right? No.
TechBeacon has a recent article looking at some of the ways that 2FA has been compromised. Most of these involve a human making a decision and taking an action to subvert security through different channels.
For me, one of the most interesting links is a blog post from Justin Williams earlier this month. His cellphone number was transferred, against corporate policy, to another phone. The hacker then used the 2FA to transfer money out of his PayPal account.  This situation is why I cringe when I hear about a service rep bypassing policy to help out a user. Every time this turns out OK it’s great. But it’s also training customer support that it’s OK to make exceptions. No, it’s not. Even when it’s the saddest sob story you’ve ever heard.

Companies train users to be victims

Also this month a health insurance company sent a USB stick to users. The accompanying letter instructed users to plug the web key into their computer. No. Just No. This is training users to be victims when some attacker decides to do the same thing.
Marketers are another big part of the problem with training users to be victims. I wrote about this almost exactly a year ago in Working around email security. Steve walked through how many banks and retailers use cousin domains earlier this year. I saw another example just recently, prompting me to create a meme to share on Facebook. 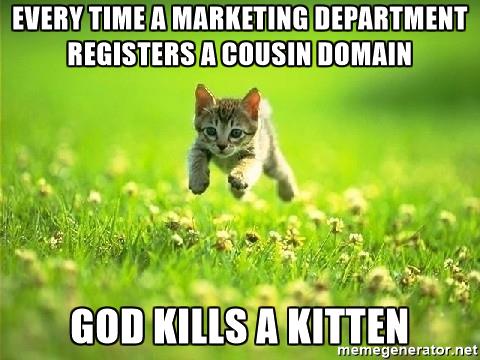 For many years, there was a belief that security and usability were contradictory. Increasing security leads to less usability. There is certainly some of that in play still. But I think many of us in the email marketing space need to start thinking a little more about security. We are responsible for presenting our brand in the inbox world. Do we want to train our users that every email comes from a different domain? All the authentication and DMARC policies in the world won’t protect us from cousin domains. Marketers that use cousin domains are setting their brands and consumers up for failure.
A brand that is consistent in its sending and authentication not only develops good reputation for delivery, they also help innoculate users against attacks by third parties. Marketing departments can take the lead in creating a more secure environment online. Building security into messaging streams is more than just technical authentication, it’s about the whole message and domains and consistency. Every marketer needs to think about how they’re presenting their brand. How many different domains are you using in your marketing campaigns? How easy would it be for a bad guy to register a similar one?
Don’t set your users up for failure.